The First Congregational Church is one of the most historic buildings on the Village Green and its history is closely intertwined with the town’s history.  The congregation celebrated its 300th anniversary in 2016.  The current sanctuary, the third one used by the congregation,  was built in 1833 and expanded in the 1890’s.  Over the years the church building has housed the town hall, the town’s Youth Agency, and has provided space for many local organizations.

The church applied for a grant from the State Historic Preservation Office (SHPO) to help with the need to shore up our failing ceiling beams.  The grant has recently been awarded.  Now the Meetinghouse Restoration Committee can begin the process of putting the project out to bid and plan the repair.

Our church members and friends have generously stepped up to meet a 40K challenge offered by an anonymous donor.  In early January, the  congregation was challenged to raise an additional $40,000 by June 1 which would be matched dollar for dollar if the goal was met.  On Easter Sunday we announced that we had surpassed the goal.  These monies will be added to the funds raised previously for “Raise the Roof”, the church’s campaign for structural repair.  Thanks to all who have donated so generously to Raise the Roof and the 40K Challenge.

The Meetinghouse Restoration Committee (MRC) is working with an engineering firm which has prepared plans for the renovation.  The current plan is to reinforce the failed beam with steel.   This approach will achieve the same goal while minimizing further damage to the ceiling.  It is hoped that repairs to the building will begin in the fall, but that depends on meeting various deadlines in the next few months.

In the winter of 2010 ice was a big problem all over New Milford.  The weight of the ice caused structural damage which deflected a ceiling beam as illustrated in the drawing.  Without additional support the beam was in danger of collapsing. The church was closed for inspection and temporary repair. 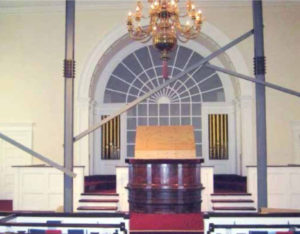 Structural steel was installed at the point of failure as illustrated in the photo to the left.  While the steel makes the building safe, it greatly diminishes the interior beauty and functionality.

This is a difficult problem to repair.  The failing ceiling beam will need to be pushed up into place and secured with reinforcements.  In order to minimize ceiling damage, this will be done slowly over several months.  Once this repair is made the interior steel can be removed.  The repair requires a contractor experienced in working in historic buildings.  Although great care will be taken, it is impossible to know how much damage will be done to the plaster ceiling when the beam is pushed into place.

The RAISE THE ROOF Campaign

The church has initiated its “Raise the Roof” capital campaign to raise the more than $500,000 needed to repair the failing beam and stabilize the building.  Church members and friends have donated more than $300,000 to date.  We are opening the campaign to community members and others interested in helping to preserve thi

s historic building.  The funds raised will be used to:

If you would like to help “Raise the Roof,” you can do so through the “Raise the Roof” fund at the Connecticut Community Foundation.  You can also use PayPal page (see link below) or send a donation to the First Congregational Church, 36 Main St, New Milford, CT  06776. (Please note “Raise the Roof” on the check or your PayPal donation).  Thank you for helping restore this historic building.

Update Personal Details
Your ticket for